What is the Weather on Kilimanjaro?

The short answer is that the temperatures on Mount Kilimanjaro range from hot to bitter cold. The journey from the gate to the peak is like traveling from the equator to Antarctica in a matter of days. This is because the routes to the Uhuru peak cross different ecological zones. Mount Kilimanjaro has five major ecological zones, each approximately 3,280 feet (1,000 m) in altitude. Each zone is subject to a corresponding decrease in rainfall, temperature and life as the altitude increases.

Moshi, the gateway town from which our climbs are organized, is located just south of the base of Mount Kilimanjaro. At 2,667 feet (900 m) above sea level, the town is located in the lowest, warmest ecological zone. Average temperature, humidity and precipitation figures for Moshi are reflected in the following table. 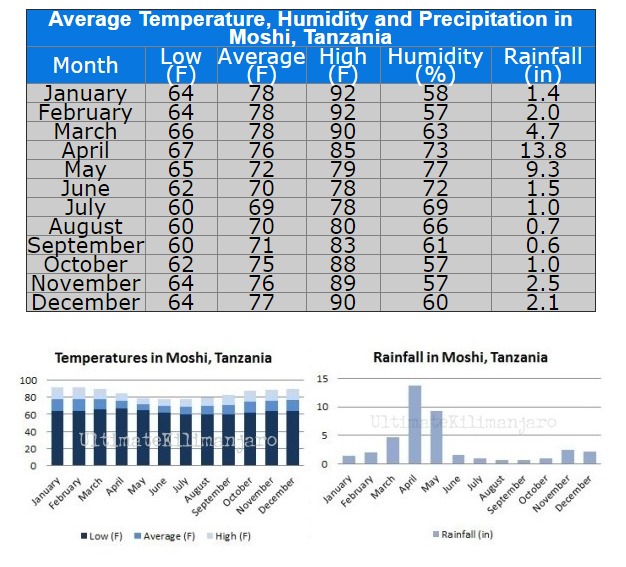 As shown, January and February are the warmest months, April and May are the wettest months, June and July are the coolest months, and August and September are the driest months. These generalities about the weather in Moshi hold true for Mount Kilimanjaro as well.

At the summit, Uhuru Point, the night time temperatures can range between 20 and -20 degrees Fahrenheit (-7 to -29 degrees Celsius). Due to Mount Kilimanjaro's great height, the mountain creates its own weather. It is extremely variable and impossible to predict. Therefore, regardless of when you climb, you should always be prepared for wet days and cold nights.

Below are the five zones from the lowest to the highest altitude along with the average annual precipitation, zone characteristics, and links/feeds to the current weather in each particular zone.