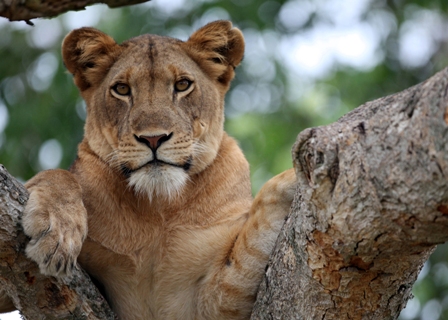 Queen Elizabeth National Park is Uganda's most popular game reserve and certainly one of the most scenic. The park lies on 5,000 square kms (1,900 square miles), making it the second largest park in Uganda.

The park is bordered to the southwest by Lake Edward and to the northeast by Lake George with the Kazinga Channel connecting the two. It stretches from the foothills of the Rwenzori Mountain range in the north, along the shores of Lake Edward to the remote Ishasha River in the south, incorporating a wide variety of habitats that range from savanna and wetlands to gallery and lowland forest.

The park is known for the big four animals: elephants, lions, buffalo and leopards. Rarely seen tree climbing lions are also found in the Ishasha area, the southern part of the park. Elsewhere, the Kyambura Gorge harbors habituated chimps, the Maramagambo Forest is home to an alluring selection of forest monkeys and birds, and flocks of flamingo are residents on the crater lakes. 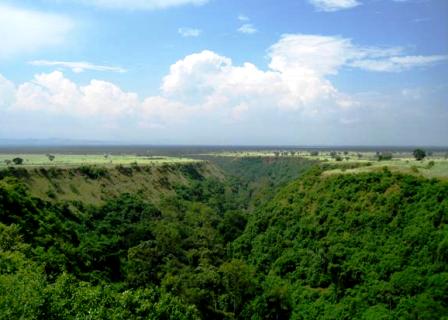 The Kyambura Gorge is carved by the Kyambura River as it flows across the rift valley floor towards the Kazinga channel. Guided walks to search for the chimpanzees start at Kyambura's fig tree camp.

Maramagambo Forest is one of the largest forests in Uganda. It is a mid altitude moist, semi-deciduous forest. It has very spectacular lakes and craters. Animals that can be found in the forest include l'hoest monkeys, chimpanzees, bush babies, baboons, vervet monkeys, and red-tailed monkeys. Due to its location, Maragambo has a high diversity of butterflies. The Kazinga Channel boat cruise is one of the highlights of a visit to Queen Elizabeth National Park. Large numbers of hippos, elephants, buffalo, crocodiles and water birds converge on the Kazinga Channel. The 40 km-long channel that connects Lake George to Lake Edward provides the park's prime wildlife spectacle. Its shoreline attracts large numbers of birds, mammals and reptiles.

The low altitude and its location directly on the equator mean that temperatures can be warm, from an average low of 18C/64F to an average high of 28C/82F. The park receives up to 1250 mm (49 inches) of rain, mostly during March through May and September and November.