The main attraction of Uganda is the magnificent and rare mountain gorilla, found in Bwindi Impenetrable Forest and Mgahinga Gorilla Park. However, traditional safaris should not take a backseat given Uganda's rich biodiversity and wildlife. Uganda offers spectacular wildlife and game viewing in its ten official national parks, ranging in habitats from arid semi-deserts, savannahs, lowlands and rainforests to wetlands, volcanoes and alpine zones . To visit all of Uganda's parks properly, you can easily spend a month here! 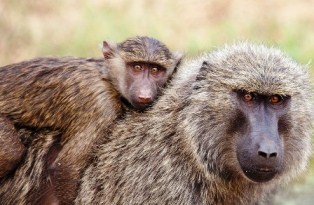 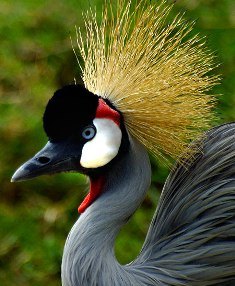 Some of the birds that can be found in Uganda include: White Necked Eagle, Hammerkop, Crested Crane, Shoebill Stork, Wattled Plorer, Africa Fish Eagle, African Jacana, Saddle Billed Stock, Pelican, Giant King Fisher, African Pigmy Geese and Narina's Trogon. Some of these species are difficult or impossible to find anywhere else (see Wikipedia for a list of birds of Uganda).

Uganda is home to the "Big Five" animals of Africa: the lion, leopard, buffalo, elephant and rhino. 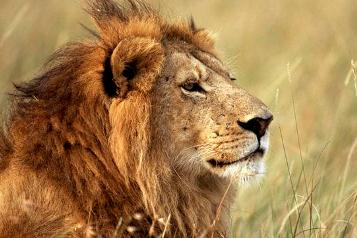 Known as the king of the jungle, lions are Africa's top predators. Lions are unusual in that they are the only cats that live in groups. These groups, called prides, can number from as few as two members to as many as 40 individuals.

Lions are mostly nocturnal and can sleep as much as 20 hours a day. At night, lions hunt together, ambushing large animals such as zebra, antelope and wildebeest in their territory. The home range of a lion pride can be as large as 100 square miles. 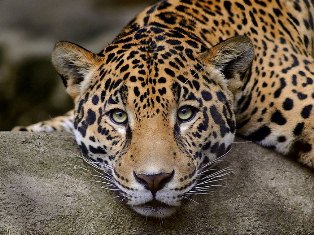 Leopards are the most difficult animal to spot of the Big Five. Besides their effective spotted camouflage, leopards are elusive, solitary, nocturnal creatures.

The leopard preys on fish, reptiles, birds, rodents, monkeys, baboons, and antelopes. The strongest climber of the large cats, the leopard drags their kills, sometimes two to three times their own weight, up a tree to feed. Male leopards weigh about 130 pounds while females weigh about 80 pounds. 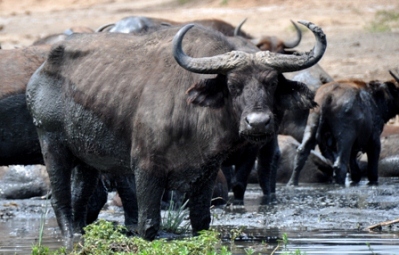 African Buffalo are heavy, bulky hoofed mammals, weighing up to 2,000 pounds. The horns of a buffalo are used to defend against predators and to fight for dominance within a herd. Buffalo are found in open savannahs, woodlands and rainforests, living in large herds that can have thousands of members. Buffalo are grazers and never stray too far from a water source.

There are two subspecies of African Buffalo in Uganda - the Cape Buffalo and the Forest Buffalo. Forest Buffalo are much smaller in size, have shorter horns and have reddish-brown fur.

Cape Buffalo and Forest Buffalo can be found in Lake Mburo Park, Murchison Falls Park, Queen Elizabeth Park and Kidepo Valley Park. The lifespan of a buffalo is 15-25 years in the wild. 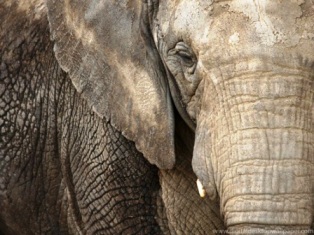 Elephants, at a height of 13 feet and weight of 6 tons, are the largest land animal on Earth. They are known for their long trunks, which is used for breathing, smelling and grabbing things, usually food. Their diet is mainly leaves and branches, but also grass, roots, fruit and bark.

Elephants are social animals and live in family units of about ten members. There are two subspecies of African Elephant - the Savannah Elephant and Forest Elephant.

The Savannah Elephant and Forest Elephant can be found in Queen Elizabeth National Park, Murchison Falls National Park and Kidepo Valley National Park. . Elephants can live between 60 to 70 years.

The Black and White Rhino are critically endangered species. Rhinos are herbivores, feeding on short grasses and a variety of plants. They stand four and a half feet tall, and weigh up to 4,000 pounds in a stocky, armored frame.

Rhinos in Uganda only exist in the Ziwa Rhino Sanctuary, located south of Murchison Falls National Park. The sanctuary is 70 square kilometers and home to twelve rhinos. Rhinos live 40-50 years.