Semuliki Forest National Park is one of Uganda's most important safari destinations for bird watching and chimpanzee tracking tours. The 220 square kilometer (130 square mile) park is one of Africa's most biodiverse forests.

It supports an exceptional variety of mammals, birds and butterflies. This is attributed to the forest's great age. During the dry conditions of the last ice age, 12,000 to 18,000 years ago, most of Africa's forests shrank and disappeared. Only a few patches like Semuliki survived, protecting its forest species. Additionally, Semuliki lies in a transitional location between central and eastern Africa, and to a variety of habitats, notably forest, swamp, and savannah woodland. 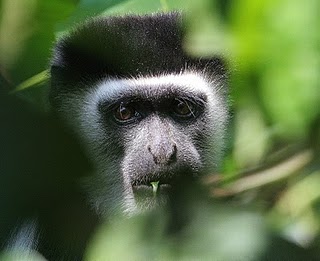 There are 63 species of mammals, including 27 species of large mammals. Forest elephant and forest buffalo are smaller versions of their savanna relatives. Hippos and crocodiles are found in the Semuliki River.

There are 9 species of diurnal forest primates like the chimpanzee, blue monkey, vervet monkey and olive baboon, and the park's nocturnal primates include poottos and galagos.

At least 374 species of butterflies and moths have been identified including 46 species of forest swallowtails and charaxes plus at least 81 species of large moth, 12 of which are classified as restricted. The wide range of species is attributed not only to the forest’s location, but to the varied habitats, forest swamp, grassland, bush land and an extensive system of hotsprings, warm swamp and savannah woodland.